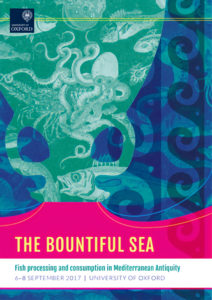 The proceedings of a conference held at the Ioannou Centre for Classical and Byzantine Studies, University of Oxfordm September 6–8, 2017, have been published in a special issue of the Journal of Maritime Archaeology co-edited by Dimitra Mylona and Rebecca Nicholson, The Bountiful Sea: Fish Processing and Consumption in Mediterranean Antiquity (2018). A book review acknowledges its potential as a roadmap for future work on the topic.

The conference gathered a diverse group of scholars—ancient historians and archaeologists, including zooarchaeologists—together with marine biologists and historians of food to address the economic, cultural, and environmental significance of fish processing in antiquity. The conference offered critical reviews of current research in different parts of the Mediterranean and highlighted fascinating new finds and methodologies. It also included an innovative test of the senses, in which preserved fish of various types, such as experimental garum, modern day bottarga, salted sardines, fermented fish oil, and Filipino fish sauce were served to participants. Finally, a Roman banquet featuring dishes based on ancient recipes was served in the Ashmolean Museum while a “bring and share” buffet organized by the conference showcased modern fish products from around the Mediterranean.