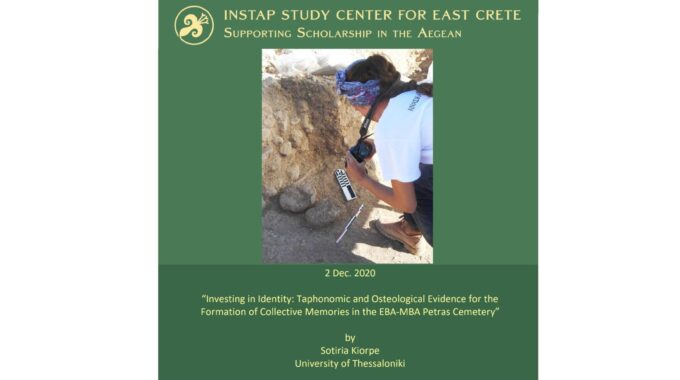 This talk by Sotiria Kiorpe (above), doctoral candidate in the Department of Archaeology at the University
of Thessaloniki, offered the first synthesis of the taphonomic and osteological evidence from the
macroscopic study of the human bone recovered in House Tombs 3, 4, 5, 10, 12, and 15 at Petras
in eastern Crete. Funerary evidence as well as other aspects of material culture have long been
deployed to document sociopolitical changes, death ideologies, and social strategies. The
construction and deconstruction of this record, particularly during the Early Bronze Age and the
first phases of the Middle Bronze Age, was determined by the performance of rituals in both open
ceremonial areas and the limited zones of the tombs in cemeteries.

During the last decade, our team has taken an osteoarchaeological approach to the study of
mortuary practices to shed light on the different modes of disposal and the complex, multi-staged
character of the funerary rituals at the Petras cemetery. Skeletal evidence suggests a continuous
and intentional interference with the dead that is evident in the secondary manipulation of the
human remains either as bundles of bones or primary burials. During these episodes of
interference, the skeletal remains (in different stages of decomposition) were not only cleaned,
swept aside, and re-arranged but were also transferred to different rooms or other areas of the
cemetery (e.g., the rock shelter). Even though long bones and skulls are over-represented, the
presence of all anatomical elements indicates that the manipulation of the human remains was
made at the original place of deposition; the under-representation or absence of certain elements
can thus be interpreted as an amalgam of the natural taphonomic and anthropogenic processes.
Additionally, the use of fire not only indicates secondary treatment but also the intention of such
manipulation. These repeated actions and contact with the dead over several episodes resulted in
the fragmentation and commingling of the human remains and served as a vehicle for the symbolic
transformation of the dead into a single collective: the ancestors.