In the lab conservators extract information from artifacts. At a basic level, this work may include cleaning an artifact to reveal its surface or reconstructing a vessel to discover its shape. It can also involve more complex investigation. The lab is equipped for microscopy, x-radiography, and basic elemental analysis, all of which are used by conservators working together with archaeologists to investigate the composition of artifacts and answer questions about how they were constructed and used by people thousands of years ago.

Slide show from left to right (click on each photo to enlarge): one view of lifting a mud plaster on site, two views of micro-excavation in the lab, five views of sorting and mending ceramic and stone vessels and a human skull, and two images of conserved vases.

The conservators are also responsible for the preservation of artifacts. Many excavated objects are very fragile, and they must be stabilized for study and long-term storage. Sometimes stabilization has to occur in the field, before artifacts can be moved from the archaeological site, so conservators are often on site in the summer season. Preservation might include adding resin to strengthen a fragile ceramic vessel or applying a corrosion inhibitor to protect a metal artifact. In keeping with modern conservation practice, only reversible treatments are employed and all treatments are fully documented.

Slide show from left to right (click on each photo to enlarge): three views of containers for ceramic and iron objects.

The laboratory is also used to support the work of researchers in many fields of archaeological science; the conservators take samples of material remains according to best practices. The conservation staff has been involved in sampling different types of material culture for various scientific analyses: metal artifacts for elemental analysis, human remains for ancient DNA (aDNA), and charcoal and other artifacts for radiocarbon (C14) dating, ash layers for chemical analysis, and organic residue from pottery for gas chromatography–mass spectroscopy (GC-MS).

Slide show from left to right (click on each photo to enlarge): four views of conservators collecting samples for analysis in the lab and on site.

The laboratory supports conservation education by hosting several interns each year. The staff has also organized workshops and demonstrations on techniques including X-radiography, handheld XRF, laser-based analysis, and Raman spectroscopy.

Finally, the conservators also work on projects outside the Study Center, primarily facilitating the publication of material from excavations elsewhere in the Aegean region. The staff also helps other institutions solve storage problems, particularly for metal artifacts. One of the most significant involved the repacking of all the metal finds stored at the British School of Archaeology (BSA) storage facility at Knossos.

The conservation lab is equipped with fume extraction (two fume hoods and fixed and portable trolley elephant trunk extractors) and other equipment necessary to meet health and safety requirements. It has compressed air and reverse osmosis water on-line, as well as a wide range of conservation tools, including micro motor drills, a Mini-Piezon ultrasonic dental scaler, a compressed air chisel, and a small Renfert air abrasive, as well as a range of resins and treatment chemicals. The lab also has four low magnification microscopes (including a Leica EZ4W with an integrated digital camera), a Bruker Tracer 5i handheld XRF for elemental analysis, and a cabinet-type X-ray unit (Faxiton HP 4385A) for studying the internal features of artifacts. Equipment used for sampling pottery for chemical residue analysis includes an ultrasonic tank as well as a Buchi Polyvap extractor. The lab also has a large oven for drying samples, a well-equipped photography setup, and a computerized documentation system. The conservation library contains many books and offprints, and we subscribe to the relevant journals.

Thanks to a substantial grant from the International Music and Art Foundation, a Bruker Tracer 5i handheld XRF was added to the equipment of the Conservation Laboratory. The precise elemental composition provided by handheld XRF allows us to characterize materials and enables the study of technology and provenance. It also helps our conservators choose the most appropriate treatment for an artifact. As a non-destructive form of analysis, XRF allows the study of artifacts without collecting physical samples and the analysis of full assemblages for data completeness.

Slide show from left to right, top row then bottom row (click on each photo to enlarge): one view of a conductivity measurement during pottery washing, three views of artifact cleaning with a micromotor drill, an air abrasive unit, and an ultrasonic tool, one view of the Bruker handheld XRF, and three views of the X-ray machine and its results.

Kathy Hall manages the William D.E. Coulson Conservation Laboratory and is a member of the INSTAP Study Center Publication Team. She graduated from Cardiff University in 1992 with a B.Sc. in Archaeological Conservation. She has worked for many excavations in Greece (particularly Crete), and several more in the U.K., Kenya, and Turkey, where she worked for four years at the Institute of Nautical Archaeology. Her particular interests include investigative conservation of all types of excavated material, including material from underwater excavations, the treatment of metallic artifacts, and storage issues for archaeological collections. 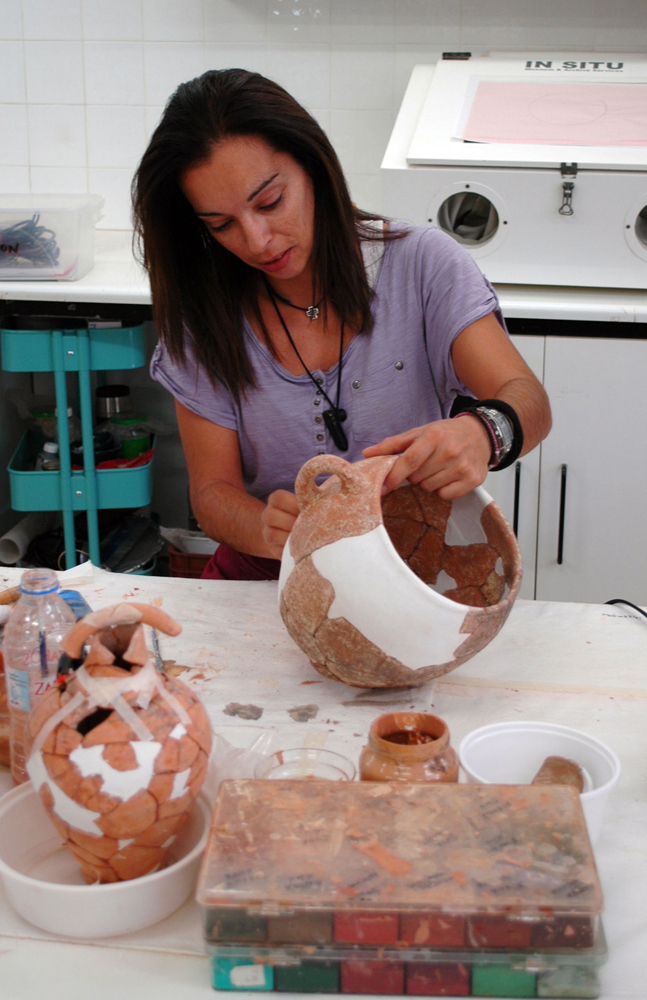 Internships in the Lab

Two eight-week internships are available each year during the busy summer period. To be considered, you must be enrolled in or have recently graduated from a degree level conservation program. To enquire about an internship contact Kathy Hall.

Internships at other times of the year also can be arranged, and career conservators who are interested in a professional development placement furthering skills in the reconstruction of archaeological ceramics are also welcome.

Slide show from left to right, top to bottom (click on each photo to enlarge): conservation interns since 2013.

William D.E. Coulson played a significant role in the resurgence of American research in East Crete during the 1980s and in the foundation of the INSTAP Study Center for East Crete. After discovering his passion for field archaeology and Dark Age pottery as a senior member of William McDonald’s excavations at Nichoria in Messenia (southwestern Peloponnese), Coulson worked at Tell Mikhal in Israel and Naukratis in Egypt. In 1978 he joined Geraldine C. Gesell and Leslie P. Day as co-director of the Kavousi Project in eastern Crete. Together they excavated the Late Minoan and Early Iron Age sites of Vronda and Kastro (both located near the modern village of Kavousi). Kastro formed the primary focus of Coulson’s research. The site’s unique contribution to the scholarship is its continuous habitation sequence spanning the so-called Cretan Dark Age from 1200 to 650 B.C. His next project was an excavation in collaboration with Metaxia Tsipopoulou of the 24th Ephoreia of Prehistoric and Classical Antiquities at the site of Chalasmenos near Monastiraki, located a few kilometers southwest of Kavousi. The excavations revealed a uniquely well-preserved Late Minoan IIIC settlement, including several houses, a public shrine, a kiln, and a tholos tomb. Coulson’s underlying contribution to these projects was the study of pottery, the most ubiquitous find on any excavation and his particular passion.

Coulson earned his Ph.D. at Princeton University. He was Professor of Classics at the University of Minnesota before moving to Greece to serve for 10 years as Director of the American School of Classical Studies at Athens. During that time he played an instrumental role in expanding the academic program of the school with new scholarships and research facilities, including the foundation of the Wiener Laboratory for Archaeological Science and the INSTAP Study Center for East Crete. Both institutions have played a significant role in supporting new techniques and science-based, interdisciplinary approaches to archaeology by American, Greek, and international teams. The conservation laboratory of the Study Center is named in his honor because of its role in the preservation and analysis of Cretan material culture.

William D.E. Coulson’s unique passion for ancient and modern Greek culture and language was widely recognized and earned the admiration of colleagues, students, and most importantly, his Greek hosts. As such he exemplified the word philhellene. He is buried in the cemetery in Kavousi, Crete.

Slide show from left to right (click on each photo to enlarge): Coulson at work at Vronda and his grave in Kavousi.