A century of intensive archaeological research on Crete has been marked by considerable progress in the study and publication of the island’s material culture. These gains, however, have been partially offset by the slow recognition that the architecture revealed by excavation has suffered from both neglect and exposure to the elements and humans. To meet this challenge in helping to preserve and manage the cultural heritage of archaeological sites in Greece, our staff has developed several initiatives for the conservation and maintenance of the earth and rubble architecture at sites in the Aegean. As a first step towards the long-term preservation of the architectural remains, our conservation team began working on sites excavated by the American and Greek-American archaeological teams based at the INSTAP Study Center for East Crete, including Mochlos, Pseira, Azoria, Kavousi Kastro and Vronda, and Gournia. In one exceptional case involving a series of LM I pottery kilns at Gournia, this work involved the conservation and reburial of fragile structures until a protective shelter can be erected over the area.

Slide show from left to right (click on each photo to enlarge): two images of wall conservation (one in a Late Minoan I house on Pseira and another in an Archaic building at Azoria) and three photos recording the stages of conservation of a group of Late Minoan I kilns at Gournia.

Since 2010, the Study Center has collaborated closely with the Directorate of Restoration of Ancient Monuments of the Hellenic Ministry of Culture and the Architectural Conservation Laboratory of the Athens University of Applied Sciences (TEI of Athens, now University of West Attica) on laboratory testing and pilot field applications of earth-based mortars for the conservation of prehistoric structures, aiming at the development of protocols for their application. These studies were conducted by an interdisciplinary team, which included conservators, engineers, architects, archaeologists, and experienced technicians. Over the past few years, after rigorous study, these mortars have been applied at more than 10 sites and have shown remarkable durability and compatibility with the original fabric of the rubble architecture. With this experience, our team then began consulting for archaeological projects of the Ephorates of Lasithi and Heraklion and other Greek and foreign institutions.

Slide show from left to right (click on each photo to enlarge): two photos of teams conserving the walls of Late Minoan I houses at Mochlos and a drawing showing the reconstructed western facade of Late Minoan I House C.3, which is being conserved in the second image.

In 2014 a major conservation program was undertaken with the financial support of the J.M. Kaplan Fund to develop conservation master plans for the sites of Mochlos and Gaidourofas in East Crete and Hagios Vasileios in Sparta on the mainland of Greece. During the two-year program, condition surveys and mapping and risk assessments were undertaken, and conservation priorities were established for each of these sites. With these parameters in hand, both remedial and preventative conservation programs were planned and implemented, which have enhanced the condition of the sites and have offered training opportunities to conservation students and professionals. In 2015, again with support from the J.M. Kaplan Fund, the Study Center initiated a new program to support the development of conservation master-planning at sites throughout Greece with earth and rubble architecture. The response was tremendous, and we were able to fund eight projects (three on Crete, two on Andros, and three on mainland Greece). Among the many gains generated by these programs was the establishment of new collaborations between the Study Center and various departments of the Hellenic Ministry of Culture, the Foundation for Research and Technology—Hellas (FORTH), the National and Kapodistrian University of Athens, and the University of Pennsylvania.

Our team is now seeking new sources of funding in order to continue the existing projects and initiate similar programs at other sites where architectural remains have been exposed for long periods of time and have suffered severe deterioration. For two seasons the Global Heritage Fund has provided funding for three-week training seminars on Crete that have focused on capacity building. The students have come from the University of Pennsylvania and Architectural Conservation Laboratory of the Athens University of Applied Sciences (TEI of Athens, now University of West Attica) and continue work on the Minoan settlements on the islet of Mochlos and the island of Pseira.

Slide show from left to right (click on each photo to enlarge): four images of site conservation of the Late Minoan I houses on the island of Pseira. 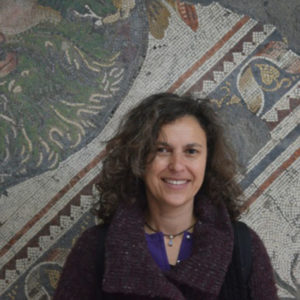 Dr. Stephania Chlouveraki earned her degree in Conservation of Archaeological Material from the Technological Educational Institute (TEI) of Athens and completed her Ph.D. on the Archaeology and Deterioration of Minoan Gypsum Rocks at the Institute of Archaeology–University College London. She currently supervises site conservation projects for the Study Center. She is a member of the Board of the International Committee for the Conservation of Mosaics (ICCM) since 2008 and the Vice President since 2014. Since 1993 Chlouveraki has been involved in a number of mosaic and building conservation and training projects in Jordan, Syria, and Oman. In 2014 she joined the Conservation Department at TEI of Athens (now University of West Attica) as a lecturer.