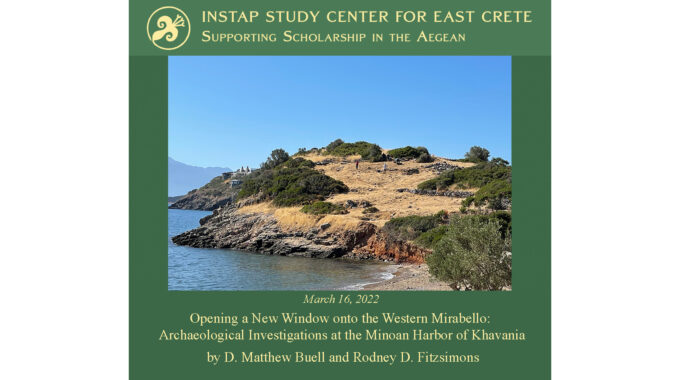 This paper presents the preliminary results of the Khavania Archaeological Project, which was conducted over
the course of two seasons in the summers of 2019 and 2021. The primary objective of this research was to
document all natural and anthropogenic features at the coastal site of Khavania, East Crete, where trial
excavations by the local Ephorate brought to light the remains of a substantial harbor settlement with
occupation spanning the Early Bronze Age through historic periods. Exploration of the eastern and southern
shores of the Mirabello Bay has produced abundant evidence for cultural development in the region, which
stands in stark contrast to the lack of attention shown for the western side of the bay, where Khavania is
situated. Rescue excavations throughout the area have produced a solid understanding of the historical
landscape, but the earlier prehistoric remains have continued to elude detection. It is in this context that
the site of Khavania begins to assume such importance. Utilizing both traditional and digital means of
architectural recording, we identified a number of structural features, while limited collection of surface
materials indicates activity spanning the Early Bronze Age through to the Medieval era. Finally, analysis of
fixed and portable remains indicates that Khavania’s residents were interacting with contemporary settlements
within the broader region throughout these periods. These results allow us to begin filling in a striking
lacuna in the larger archaeological landscape that occupies a key, strategic position at the crossroads of
several important communication routes running along the north shore of the island.