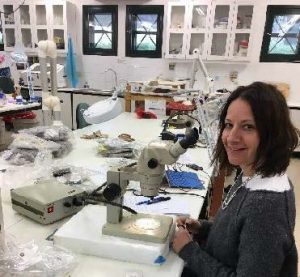 In 2009 she began a three-year post-doctoral fellowship at the British School at Athens (BSA), funded by the Leventis Foundation. This project investigated a key issue in Mediterranean prehistory, the time frame for the domestication and intensive cultivation of the vine and olive in Cyprus and the Aegean. It was based on archaeobotanical data from well-stratified Early Bronze Age contexts in the Aegean, which were the result of a targeted collection strategy that she designed and executed.

After several post-doctoral positions in the Wiener Laboratory of the American School of Clas-sical Studies at Athens (ASCSA), the Fitch Laboratory (BSA), and a Marie Curie Fellowship at Cambridge, Evi joined the Science and Technology for Archaeology Research Center of the Cyprus Institute as an Assistant Professor. Her current research focuses on: 1) the history of the vine and the olive in the Mediterranean and beyond; 2) the integration of rural and urban research: houses, space, and function during the Iron Age and Classical periods; and 3) agriculture, landscape, and economy of “centers” and peripheral sites in the Mycenaean world through the study of the plant remains from Mycenae, Midea, Tiryns, Mygdalia in Achaia, and Hagios Ioannis in Boeotia. She is also developing an interdisciplinary project on ritual and funerary food deposits in Europe and is currently the assistant director of the Cambridge Keros Project in the Cyclades.

The study of the Pelekita material, which goes back to the Neolithic period, will add significantly to the scarce information we have from that era on Crete. The focus on Bronze Age East Crete will illuminate aspects of the relationship between people and plants: the reconstruction of diet, farming practices, exploitation of wild resources, and the production of fodder. Also at a broader level the social and cultural role of food for a certain society in a defined chronological framework will be explored with special focus on the differences between the Prepalatial and the Palatial periods as well as between elite centers and the periphery.

Dr. Margaritis has created a plant reference collection at the Study Center, which is also used by other researchers to facilitate their archaeobotanical studies.

Selected Publications on the Archaeobotany of Eastern Crete

Brogan, T.M., Ch. Sofianou, J.E. Morrison, D. Mylona, and E. Margaritis. 2013. “Living off the Fruits of the Sea. New Evidence for Dining at Papadiokampos, Crete,” in Diet, Economy and Society in the Greek World: Towards a Better Integration of Archaeology and Science. Proceedings of the International Conference Held at the Netherlands Institute on 22–24 March 2010, S. Voutsaki and S.M. Valamoti, eds., Leuven, pp. 123–132.

———. Forthcoming. “Cultivations, Agricultural Practices, and the Everyday at Neopalatial Mochlos,” in Mochlos IVA: Period III. The House of the Metal Merchant and Other Houses in the Neopalatial Settlement (Prehistory Monographs), J.S. Soles and C. Davaras, eds., Philadelphia.