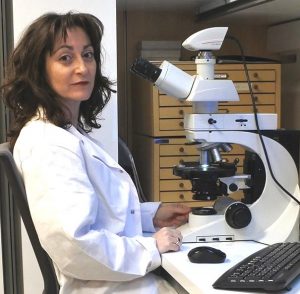 Georgia Tsartsidou is a phytolith specialist with a Ph.D. in phytolith analysis (2009) from the University of Thessaloniki (Greece) in collaboration with the Weizmann Institute (Israel). Her doctoral research was funded by the Wiener Laboratory of the American School of Classical Studies at Athens (2003), the British School of Archaeology at Athens (2004), and the Leventis Foun-dation (2004–2007). As part of this work she conducted ethnoar-chaeological research in traditional Greek villages to test whether phytoliths could serve as a useful tool for understanding the use of space and agropastoral activities performed by Neolithic farmers. Her research later expanded to additional sites, archaeological periods, and countries again with funding from the Wiener Laboratory (2010, 2012). She is currently working as an archaeologist focusing on phytolith analysis from sediments at several archaeological sites in Greece, Cyprus, Albania, Hungary, and Turkey. The sites span from the Lower Palaeolithic and first villages of the 9th millennium in Anatolia and early Neolithic of Greece to Minoan and Mycenaean settlements and cities of historical dates. She is also involved in phytolith analysis at several projects supported by the Study Center on Crete (e.g., Chryssi, Mesorachi, Knossos, and Pelekita).

Phytoliths are microscopic mineral forms that consist of silica, which develops in the cellular systems of living plants. The “opal” replicates the shape and the size of the cell in which it is formed, and phytoliths thus can be classified according to their morphology. Their significance is that they are inorganic and therefore resilient components in most soil environments. Phytoliths tend to be liberated and deposited through decay-in-place mechanisms and thus usually represent activities that took place at the locations in which they are recovered. Phytolith analysis has been applied in studies of: a) the paleoecology, providing information on the ecological settings of sites (e.g., grassland, forest, lake, stream, or swamp areas) and paleoclimatic conditions (e.g., arid, wet, cold, warm); b) the paleodiet of humans and animals; and c) past human behavior (e.g., basketry, matting, roofing, threshing) and activity areas, providing information on agricultural and pastoral practices.

Sediment samples from Chryssi have been analyzed in order to investigate spatial usage and plant use by the Minoans living on the island. The assemblages show differentiation between the rooms and buildings. Some preserve cereals, indicating the processing or storage of food remains, while others are very rich in palm phytoliths, indicating the use of parts of palm trees (wood, leaves, and/or fruits) for roofing, matting, or food.