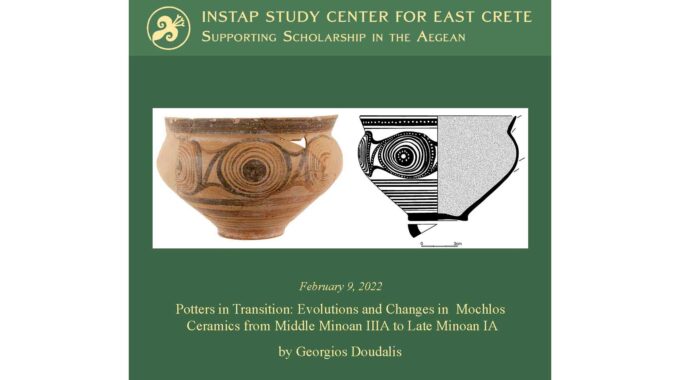 This presentation explores pottery from the early levels of the Ceremonial Building B.2 at Mochlos, with special attention to those spanning Middle Minoan IIIA to Late Minoan IA periods. The study of this stratified material offers the chance to observe how shapes and decoration evolve and change in successive periods, for example the replacement of the earlier carinated cup by the bell cup and everted-rim conical cup (MM IIIA-B), the appearance of the plain handle-less cup in LM IA, and the continued use of the rounded cup but with new decorative styles in MM IIIB/LM IA. Macroscopic analysis of fabrics revealed both the continued use of the same local clay resources from the Protopalatial into the Neopalatial period and shifting trading relationships over time. Thanks to recent study of the material, additional examples of potters’ marks across a range of vessels provide further evidence for undisrupted localized pottery production starting at least as early as MM IIB and continuing into the LM IA period. Viewed in concert with the broader trends shaping ceramic production and consumption across the island from the Protopalatial period, the adoption of new shapes is brought into conversation with the presence of local workshops.