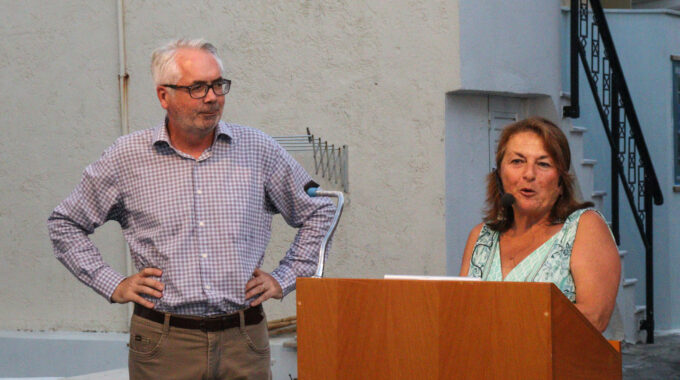 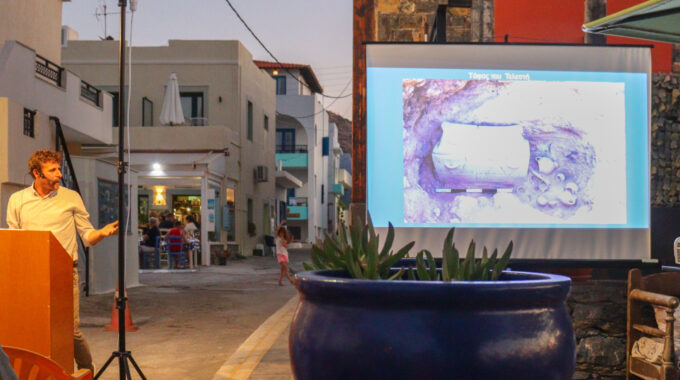 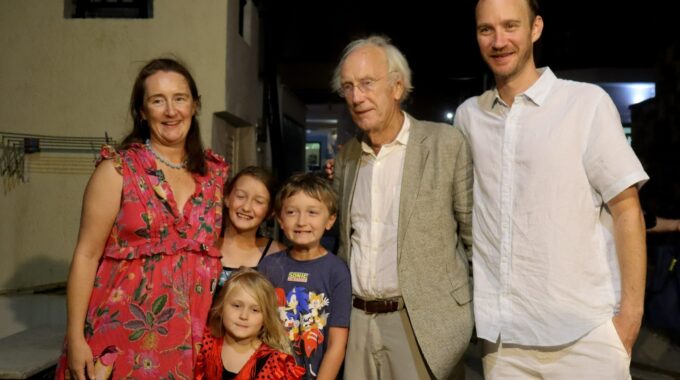 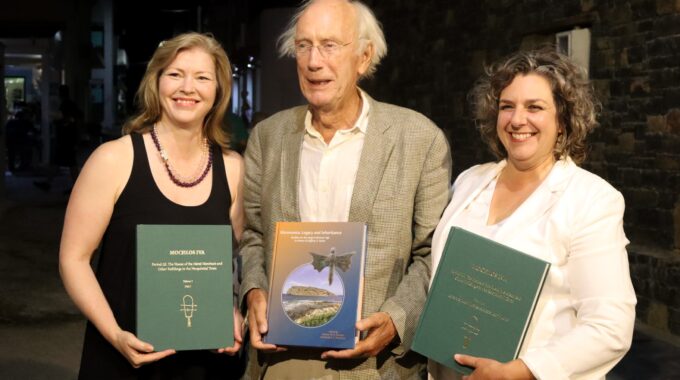 Susan Ferrence, Jeff Soles and Jerolyn Morrison with copies of his books. Photo by Joanna Vasdeki.

Tom Brogan, Jeff Soles, and Georgos Zervakis with the plaque awarded to Jeff by Georgos. Photo by Joanna Vasdeki. 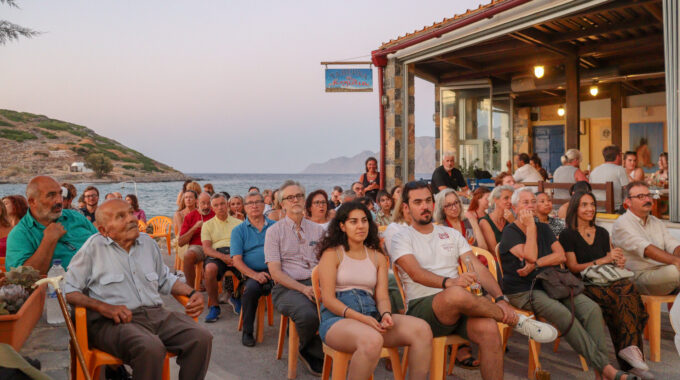 View of the audience sitting outside Kochilia Taverna with the island of Mochlos in the background. Photo by Joanna Vasdeki. 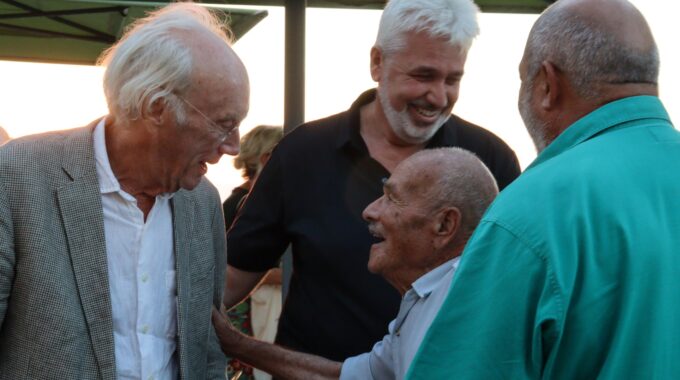 Friends from Mochlos, Crete, and the wider archaeological community joined members of the Soles family Friday night (July 29) to celebrate the outstanding work by Jeff Soles at the site of Mochlos since the early 1970’s.

Chrysa Sofianou, Director of the Lassithi Ephorate of Antiquities, kicked things off with warm greetings from the  Ministry of Culture. Tom Brogan followed with an overview including Jeff’s service in the Peace Corps, distinguished teaching career at the University of North Carolina Greensboro, and co-direction of one of the longest running and most distinguished cooperative excavation projects of the American School of Classical Studies (5 campaigns covering 13 seasons, all but the last conducted with Costis Davaras). George Doudalis then reviewed Jeff’s top 20 discoveries at Mochlos followed by a discussion of Jeff’s major publications led by Tom Brogan.

Next,  a series of presentations were given beginning with Jeff’s children, Abigail and John, reading their mother, Mary Ellen’s, descriptions of working with Jeff at Mochlos in the early years. Jerolyn Morrison then presented Jeff with his Festschrift, Kleronomia: Legacy and Inheritance: Studies on the Aegean Bronze Age in Honor of Jeffrey S. Soles, which she co-edited with Joanne Murphy. The volume contains dozens of papers by colleagues on topics related to Jeff’s research interests. Susan Ferrence, Director of Publications at the INSTAP Academic Press, then presented Jeff with the first copy of Mochlos IVA. Period III. The Neopalatial Settlement on the Island. The House of the Metal Merchant and other Houses in the Settlement. Last but not least, the mayor of Siteia, George Zervakis, awarded Jeff a plaque honoring him for his contributions to the study of Cretan history and archaeology at Mochlos.

More than 80 guests then joined Jeff and the Soles family for a dinner at the Kochilia Taverna, organized by George Frangiadakis and the INSTAP Study Center for East Crete. The venue was special because its owners, George and his parents and grandparents, have been feeding Jeff there since his first days at Mochlos as a graduate student and member of the American School of Classical Studies. It was a memorable feast.