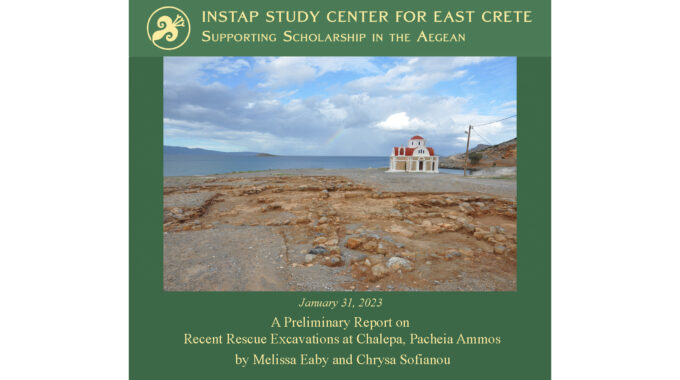 In 2018 rescue excavations were conducted by the Lasithi Ephorate at the site of Chalepa, which is located on a small promontory at the eastern end of the bay of Pacheia Ammos. Although the site is not well preserved, having been disturbed by activity in WW II and subsequently, the remains of at least seven different buildings, as well as various courtyards and exterior spaces, were revealed. Multiple types of buildings, including apsidal, oval, and rectangular, are represented and show multiple architectural phases. The remains date primarily to EM IB, though there may be limited evidence of EM IA and EM IIA. The site has produced a wide range of pottery, evidence for obsidian working, and potentially also for hide-working and pottery production. The investigated area represents part of a larger settlement, which was previously identified by the Gournia Survey. The recent excavations at Chalepa provide significant new evidence for better understanding the early Prepalatial period in this part of the island.

Please register for this lecture: https://us02web.zoom.us/meeting/register/tZAsc-CppjgtHNU76uiTNNNRh3OUOYwRlWta